From the 15th to the 17th of June, we are organizing the 6th edition of SiriusCon, the annual conference dedicated to Eclipse Sirius, the open-source graphical modeling solution. For the third time in a row, it will be held online.

On the program, among the very different topics that will be presented this year, the Cloud is unmissable! It will be addressed in two main axes. First, as a use-case of Sirius, with SODALITE IDE and AWS Workbench, and secondly in the Sirius technology itself, with Sirius Web.

SODALITE IDE, a Smart Development Environment for Infrastructure as Code

As IT infrastructure’s complexity is increasing, spanning over hybrid architectures and systems, there is an evident need for abstraction. A response to this complexity is to provision and manage computer data centers through machine-readable definition files, rather than physical hardware configuration or interactive configuration tools. This approach, named IaC (Infrastructure as Code) relies on various different scripting languages, with their corresponding development processes, that must be learned by the experts in charge of a Cloud deployment.

Created with Sirius and Xtext, the SODALITE IDE, is a modeling tool that addresses complex tasks of configuration, deployment, and operation of complex applications by assisting the users in the authoring of application deployment topology and infrastructure models for IaC. It is a result of Sodalite, a project funded by the European Union’s Horizon 2020 research and innovation program, that aims to simplify the modeling of application and infrastructure with a focus on the performance of deployed applications.

The main novelty of this tool is its ability to simplify this task by offering semantic-based guidance to the end-users.

During his talk, Jesus will present the tool and explain how Sirius technology permits the creation of multiple synchronized textual and graphical representations of the same architecture.

On the 16th of June also, RKVS Raman from McKinsey in India will present AWS Workbench, another tool, also built on Eclipse Sirius, that aims to solve pain points observed in current AWS cloud architecture design and deployment process.

The main issues identified were the ambiguity in the translation from design to infrastructure code, and the lack of a view of what is really deployed, which lead to communication problems, bad surprises, and a waste of agility for Architects, Cloud DevOps Engineers, Product Team, ... and all the stakeholders in general.

With AWS Workbench, the objectives were to enable best practices and pattern-based development, to improve the communication on deployed infrastructure, and to facilitate reusability. The approach is based on the ArchOps concept: “an extension for DevOps practice, starting from software architecture artifacts, instead of source code, for operation deployment”.

Provided as a truly visual IDE for designing AWS infrastructure, the tool can automatically generate about 80% of infrastructure code for AWS’s Cloud Development Kit, with smart and secure default values based on AWS’s best practices. 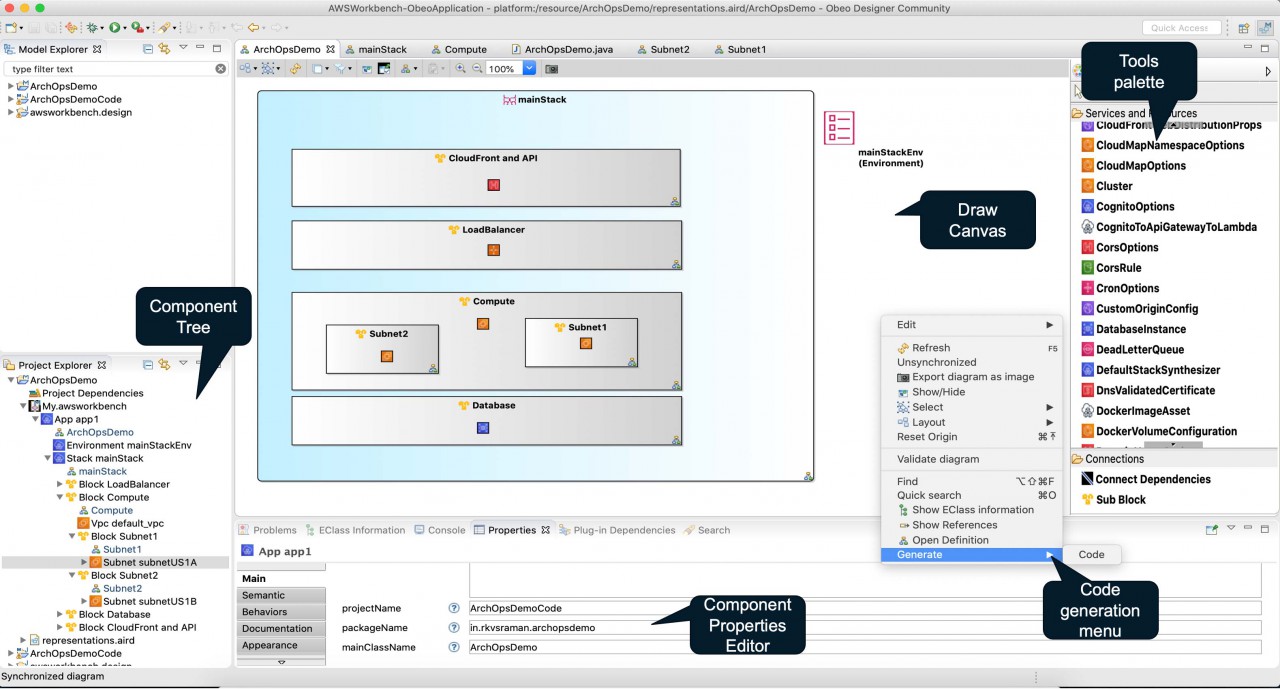 RKVS Raman will present the tool and how it has been developed by using Sirius and AWS Cloud Development Kit.

Sirius Web, to easily create and deploy Studios to the cloud

These two use-cases propose new solutions to facilitate the deployment of applications to the cloud. But, as they have been developed with Sirius Desktop, users need to download and install the tools locally, on their own machine. What if they were also deployed in the cloud, and could run through a simple web browser? That's the kind of scenario that Sirius Web aims to support.

Announced last year during SiriusCon 2020, Sirius Web has been successfully created as an open-source project. It already provides a solid cloud-based stack and many features for creating modeling tools that can be deployed to the web.

During this new SiriusCon edition, several talks will present the status and new features of the Sirius Web project:

Of course, many other topics than the cloud will also be addressed during the event. For a complete list, check out the program!