Industries are relying either on ad hoc or rigid tools for systems engineering. Either the tool is built “in-house” and grow organically or it is bought to one of the big software vendors and then the company have to adapt its practices and teams to use it. Such software vendors might use every opportunity to lock in their users, in both cases the tool longevity is quite uncertain.

In the last 11 years, Obeo went from a 3-to-50 persons company and from an unknown organization to one of the largest contributor to the Eclipse Modeling technologies leading individual projects (Sirius, Acceleo, EMF Compare) up to worldwide awareness.

We’ve been challenging this status quo since day one. What if there could be a solution which would be adaptable yet built on strong methodological and technical foundations, open-source, available to all, and with an open governance. A software that anybody can download and use without going through a registration, a tool built from the trenches, polished and tested under many environments, a project which future can be oriented by the organizations using it through their direct involvement? 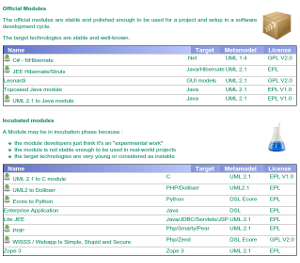 Our first open-source software was Acceleo and aimed at empowering developers by helping them write code generators. For the 2.0 release in 2007 we managed to ship dozen of code generators built by contributors. From C# to Php or Python; the community provided off-the-shelf tools able to compete with the solutions on the market. In many ways this contributed to Obeo’s growth, which itself contributed to our capacity to contribute to Open-Source.

I felt ecstatic at this success even though that was at a very humble scale.

Fast forward 5 years later, Sirius: the outcome of our collaboration with Thales; is released as an open-source technology. Technology to swiftly build graphical design tools for any domain, tools which empower users. Now hundreds of graphical modelers are hosted on github, some of it experiments, others full fledged products.

I’m filled with curiosity regarding all these uses of Sirius, each domain can get so interesting I would love to get involved with every single one. 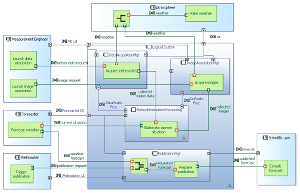 Once Sirius was open-source, it then became possible for the systems engineering tool Thales had built for years to be publicly released and have a life outside of the organization. This tool is Capella and got pretty popular, especially in the last few months. It is the perfect instance of a tool which is built on strong foundations, ready to use yet adaptable.

It has been built by Thales: a worldwide recognized leader in building the most challenging critical systems and rely on the “Arcadia” engineering method (ARCHITECTURE ANALYSIS & DESIGN INTEGRATED APPROACH). It is available to all and has an open governance through the Capella Industry Consortium.

This gives me optimism as strong and open systems engineering tools might be closer than one would think.

We always envisioned Obeo to be a worldwide company. Open-source made us recognizable and we worked with many countries in Europe and North America. This also made us highly aware that being physically on the continent was important to reach the market there.

Engineering is of importance across the globe, but North America is for sure a central place in regard to aeronautics, space, transportation and industrial systems.

We are taking the next step toward a future built on top of open tools by opening a subsidiary in Vancouver, Canada, to develop the business around modeling technologies including Capella. I’m incredibly excited by this prospect, we’ve been preparing this for quite a few months and I am thrilled to publicly share our plans.

Stephane will open and manage the subsidiary in Vancouver. He will move there with his family, most likely near the end of 2017 and start the activity there.

I am stepping into the role of CEO which he had before. He did such a great job in shaping Obeo as it is now that I can only be very humble in front of the task awaiting me, the fact that I’m tackling it with an amazing team gives me a lot of comfort.

As VP and sales director Etienne will also focus on international business and structure the development starting in Europe and Asia.

That’s not all, Mélanie is stepping into my shoes as CTO, if you are in the Eclipse community I’m certain you met her and came to appreciate her work! In the last few months she has taken my responsibilities in Eclipse (and more as she even holds the position of chair of the planning council, congrats!). She is now also responsible for the R&D, products, roadmaps, the corresponding team at Obeo and the processes and practices within the organization.

We’ll pursue our commitment in enabling open and efficient tools, you can join the ranks in many ways, by evaluating and trying tools such as Capella, by promoting open solutions, by pioneering such tools in your domain of expertise or even support us to start the activity in North America. You could get the benefit of innovative products transforming the way your team is drafting, designing and simulating, just like Thales did!

Obeo goes international and brings open modeling technologies and systems engineering tools in North America! With this evolution my mission changes and I face exciting challenges, I’ll undertake with the wonderful talents forming the company. I’m enthusiastic about the future we’ll contribute to building, a future filled with tools supporting many domains based on open technology!

Original link
|
obeo
Zero to CTO
You only have a few more hours to submit to Eclips...